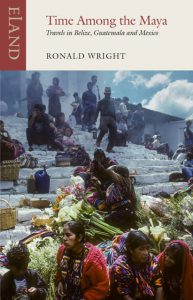 New editions of Ronald Wright’s acclaimed Time Among the Maya and Cut Stones and Crossroads: A Journey in Peru were released in August 2020 by Eland Books, publishers of classic travel writing and biography.

Pico Iyer introduces this edition of Time Among the Maya, and Alberto Manguel introduces Cut Stones and Crossroads.  Each book also has a new afterword by Ronald Wright.

Eland’s new edition of Wright’s On Fiji Islands was released in autumn 2020.

A Fifteenth Anniversary edition of A Short History of Progress with a new introduction and update by Ronald Wright was released by Anansi in September 2019.

An excerpt from A Short History of Progress and podcast interview with Nahlah Ayed, host of CBC Radio IDEAS, can be heard here.

On March 16th, 2021, Ronald Wright spoke by Zoom to the Anglo-Peruvian Society: “The Gold Eaters: History as Fiction, Fiction as History.” He discussed the role of pandemic disease and propaganda in the history of Peru, and described how his travels there led him to write his first book, Cut Stones and Crossroads, and his latest, The Gold Eaters, a novel set during the Spanish invasion of the Inca Empire.

Ronald Wright’s latest article —on Collision of Worlds by David Carballo, Inca Apocalypse by Alan Covey, and Conquistadores by Fernando Cervantes —was the lead article in the Times Literary Supplement (TLS) of January 1st 2021.

Wright’s review of John Hemming’s latest book, People of the Rainforest, was published by the Times Literary Supplement (TLS) on March 20th.

For a trailer and other news about Surviving Progress, Martin Scorsese’s documentary based on A Short History of Progress, please visit https://survivingprogress.com/