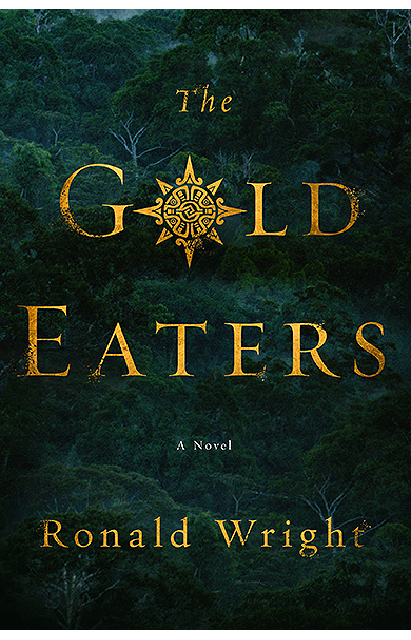 Kidnapped at sea by conquistadors seeking the golden land of Peru, Waman is the everyman thrown into extraordinary circumstances. Forced to become Francisco Pizarro’s translator, he finds himself caught up in one of history’s great clashes of civilizations, the Spanish overthrow of the Inca Empire in the 1530s. To survive this ordeal he must not only learn to play a many-sided game but also decide who he truly is. Only then can he find the love of his life and begin the search for his shattered family.

Based closely on real events, this is a grand, propulsive adventure of greed, blood, and betrayal. Yet it is also the powerful story of Waman’s journey through tumult and upheaval. Drawing on Wright’s imaginative skill as a novelist and deep knowledge of South America, The Gold Eaters brings alive an epic struggle that -as Adam Smith and Karl Marx both noted -laid the foundations of our modern world.

Praise for The Gold Eaters

“Utterly irresistible…The Gold Eaters is truly the gold standard to which all fiction — historical and otherwise — should aspire.” –Lincoln Thompson, BuzzFeed (USA)

“[An] epic adventure of conquest, war, and cultural differences…Wright displays his mastery of the historical fiction form with this terrific novel that will enlighten anyone interested in the conquest of Peru.” – Library Journal  *starred review*

“Readers are treated to a riveting account of the wealthy, culturally superior Incans and the encroachment of the Spaniards on their civilization…Wright’s fictionalized treatment brings those abuses home in a visceral way—readers will never again think of conquistadors without shuddering.”  – Booklist *starred review*

“The writing flows smoothly with the plot in this beautiful narrative of historical fiction… fans of high adventure will enjoy this grand story.”  -Michelle Martinez, New York Journal of Books

“Wright is an extraordinary storyteller and historian. One of the best books I have ever read.” -Victoria Jonas, National Post

“Ronald Wright has dug deep in the treasure of the Spanish-American chronicles and come up with a golden, fabulous story of courage, greed, political intrigue and the treacherous bridges we build between clashing civilisations.” – Alberto Manguel

“The Gold Eaters is more than a heart-pounding epic; it is a brilliant and difficult reflection on the breaking of an Indigenous people on the wheel of ‘progress.’ Ronald Wright is a storyteller at the height of his powers.” – Joseph Boyden, author of The Orenda

“The Gold Eaters is majestic in its sweep and gives the reader a tangible sense of a culture that is being destroyed, its weaknesses and wonders, as well as the semi-demented state of the conquerors driven by desperation as well as greed. And always, the beauty and epic scale of the land around them, coloured with the pain of small individual lives which both are, but are not, history.” – Sarah Dunant, author of Blood and Beauty

“This is a rousing adventure tale of bold exploration and conquest, but best is Wright’s vivid portrayal of unrestrained 16th-century Spanish imperialism, complete with villains, victims, and a few heroes.” – Publishers Weekly

“Wright is a fine stylist, never more so than when alternating between shocking violence and tender intimacy…. In its ambition and drive to bring the past level with the present, The Gold Eaters resembles another extraordinary recent novel about disastrous first contact, Joseph Boyden’s The Orenda. Interesting that Canadian writers should now be so determined to explore how and when we got here, and who, at heart, we all are.” – Charlie Foran, Maclean’s

“A brilliant piece of historical fiction, [The Gold Eaters] reads like an adventure story by Robert Louis Stevenson or Sir Walter Scott, but which is full of import for our current times.” -Peter Robb, Ottawa Citizen

“A lively tale with an epic sweep…It is hard to read The Gold Eaters without noting that the world is not so different today.” – Quill & Quire

“A brilliant and epic work of historical fiction…characters leap off the page…You know you’re in the presence of great talent when someone makes something incredibly difficult seem effortless.”  —Rain City Reads (Top Ten of 2015)

“The conquest of the Incas has long called out for a full-blooded fictional treatment, a version of history related at first hand, propelled by the hearts and minds of those who lived it. And now along comes Wright[‘s] powerful re-enactment of those searing times… The Gold Eaters succeeds gloriously.”  -Oakland Ross, Literary Review of Canada

“Absorbing…eloquent…Wright’s prose is delightful, whether conjuring peaceful mornings on the beach as a teenager prepares to take on a man’s role or describing the brutal battles that marked the times and the colonization. Wright’s dual roles as historian and novelist enable him to recreate for the reader the splendour and subsequent devastation of 16th-century Peru.” –Chris Smith, Winnipeg Free Press

Praise for Ronald Wright’s other fiction

“An elegant novel . . .gripping and lyrical; you struggle to slow down but find yourself rushing forward.” —The New Yorker [A Scientific Romance]

“Powerful . . . cunningly fashioned . . . The novel works on all levels [and] its flair for description can be positively Dickensian.” —New York Times Book Review

“An unforgettable novel, meant to be read again and again in disbelief and understanding.” —USA Today [Henderson’s Spear]