Stolen Continents: Conquest and Resistance in the Americas 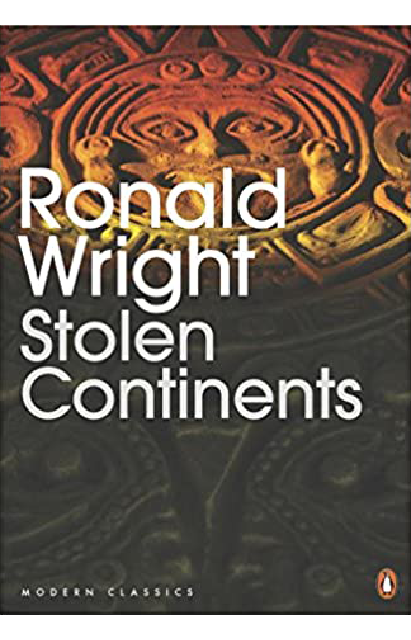 An international bestseller, Stolen Continents is a history of the Americas unlike any other. This fascinating volume chronicles the conquest and survival of five great American cultures— in their own words. Ronald Wright gives voice to the Aztec, Maya, Inca, Cherokee, and Iroquois, quoting their authentic speech and writing, and illuminating their unique views of history. Through their eloquent words, we relive their strange and tragic experiences.

Covering the five hundred years since Europeans first set foot in the “New World,” Wright weaves together contemporary accounts with his own incisive historical narrative to create an indispensable record, one that is powerful, vivid, accurate, and classic.

Winner, The Gordon Montador Award
Chosen a book of the year by The Independent and The Sunday Times
Trillium Book Award finalist
CBA Author of the Year finalist

“A very good book….Wright marshals his eyewitnesses with great skill and compassion….He is an historical philosopher with a profound understanding of other cultures.”
Jan Morris, The Independent

“Harrowing and impassioned…a grim indictment of the barbarous piracy by which the continents were won.”
Helen Carr, The Observer

“All who are interested in the clash between European and American cultures should read this well-written book. They will be moved to compassion and outrage.”
John Hemming, History Today

“An unusual and fascinating work.”
The Atlantic

“A stunning book, a non-fiction tour-de-force, a ground-breaking work…Wright has outdone himself with this devastatingly well-documented portrayal of what Europeans have done to the native peoples of North, South, and Central America.”
Kenneth McGoogan, The Calgary Herald

“For five centuries, the Indians of the Americas have doggedly recorded the shocking story of their subjugation by whites. Now Ronald Wright has woven their voices into a compelling narrative.”
Paul Knox, The Globe and Mail

“A powerful account…The strength of Stolen Continents is that it conveys just how much has been lost or suppressed without lapsing into a litany of angry grievances.”
Diane Turbide, Maclean’s

“Compelling…Memorably demolishes the myths of the victors.”
Piers Brendon, The Mail on Sunday

“Passionate and moving…The reader is left in no doubt that 500 years later the ‘theft’ is still being contested by those who have not lost sight of their ancient culture.”
Victoria Schofield, The Financial Times

“The effect of reading [Stolen Continents] is like a cataract operation.”
Phil Jenkins, The Ottawa Citizen

“Stolen Continents ripped through me like a bullet. I thought I knew much of this history. I did not…Ronald Wright has achieved something lasting.”
Lawrence Scanlan, The Whig-Standard

“A great sweep of time and space is economically and lucidly surveyed…Genocide over many centuries is the central crime, and the attitudes which produced it are still at work in Guatemala, Brazil, Peru and even (shamefully) in Canada.”
Hugh Brogan, The Times Educational Supplement

“A magnificent feat of research, writing, and perception-adjustment… Wright draws on period documents to portray the European invasion of the Americas through Aztec, Maya, Inca, Cherokee, and Iroquois eyes. In the process, he makes history come alive…in a way it rarely does.”
Michael Upchurch, The Seattle Times

“Do you want to know how American Indians ‘discovered’ Europe? Read this book.”
Eduardo Galeano